**Update 3/26/2013: I've encountered some odd (but not unprecedented, even pre-swap) behavior since the battery swap. I did a full run-down test and it appears to be able to crank through about 8 1/2 hours but it also came up dead after what was indicated as a full charge. Will keep testing. **

I've owned my Garmin Forerunner 305 since shortly after I started running. Purchased near the end of its product cycle, the 305 (and its HRM-less twin the 205) was a supreme example of value: bulletproof construction, great reliability, 10 hour battery life, HRM strap, and all for only $120-150 on clearance all over the internet. Even well after the release of the 310xt, the 305 remained for most folks, the lord of all GPS watches - mostly on account of the 310xt's occasionally flaky GPS and a tendency to suddenly, and for no apparent reason, die. (Obviously, not an ideal quality in a $300-400 product) At least that's what I heard on Dailymile and Facebook anyway.

My own 305 has logged well over 1000 miles over the last couple years, and has been my friend through many dangers.

It was with great sadness then, that early this winter I noticed the battery in my trusty wrist-mounted companion was beginning to flake out. By January, through a combination of age and frigid Wisconsin winter temps, it had gotten so bad that I could no longer rely on it for anything longer than a 3-mile outing without fearing that its charge would take a big steaming dump before I finished my run. A multi-hour trail outing was simply out of the question. At that point it was of no more use to me than a paperweight.

Since my search for a total replacement was not going well (subject of another post) I searched around for battery replacement options. Apparently, one can send the unit back to Garmin for service which will set you back around $85 dollars. Since you allegedly also lose all the data stored on it, this leads me to believe that they just send you a refurb unit.

The other option I found is a DIY battery swap. It turns out that the battery for the iPod mini is the appropriate voltage and size so as to be a great replacement option, and is available online for cheap. So, if you've got an ailing Forerunner 305 (or 205) a few bucks, and some basic soldering skills, buckle up because its DIY time!

Things you will need:


Before anything, you will need to obtain a replacement battery. An Amazon search for "iPod Mini Battery" yields a bunch of results. As the factory battery is of 720 milliamp-hour capacity, we will want to do at least as good as that. Also, since random 3rd party batteries of unknown provenance tend to be of lower quality than OEM, assume that the thing will give you less than the specs suggest. Go big or go home. Besides, there's like practically no difference in price. I bought one of these.

First step is to crack the unit open. You will need a thin, flat, strong object to pry open the case. I do NOT recommend a screwdriver. The plastic is pretty soft and you will probably just damage the case and not be any closer to opening it. If you have one, I recommend a watch case knife. If you don't have one, they are easily obtainable for a few dollars online.

Alternatively, the battery replacement I bought came with some case opening tools for cell phones which might work too. YMMV.

Or you could be dumb like me and use an actual knife. (Also not recommended due to the increased risk of slashing your hand open, necessitating an ER trip and many stitches)

I found that the only real spot to get any leverage was at the seam below the antenna. 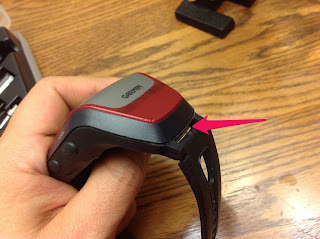 Work slowly and patiently around the case, coming back to the bottom seam to apply a little more oomph and eventually the unit will start to open. At that point you can carefully get in there and just slowly pry the thing open like a baby alligator's mouth. It will come apart into two pieces (>2 pieces is no good). 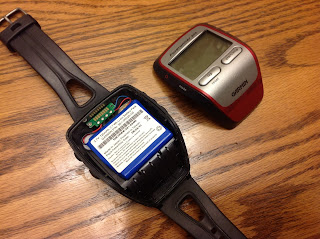 As you can see, virtually all the guts are in the half attached to the unit's face. The only things in the bottom are the battery, the speaker, and an 8 pin interface between the two halves. Pretty clever design really. One thing to point out at this point is the clear shield attached to the back of the face-half, just below the contacts that interface with the back-half. Make sure you don't knock that off. It appears to be there to prevent shorts or otherwise inappropriate contact with the exposed connections leading into the board. It also doesn't appear to be held on by anything other than hopes and fairy dust. 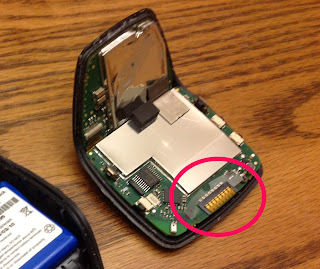 Next you'll need to remove the battery. My understanding is that the batteries are either held in by dab of glue or with an adhesive tape. Mine was affixed with the stickiest tape in the whole world. Seriously, I was afraid I was going to break something working the thing out. Again, patience pays dividends. 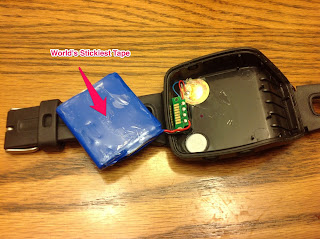 From here, you need to clip the old battery out, ideally leaving as much wire attached to the watch as possible. Strip the end of the wires. The wires are super thin so I my wire strippers wouldn't work, but I was able to pinch the insulation with my fingernails and strip them off that way. No turning back now! 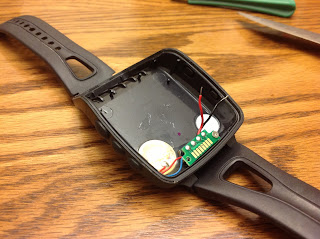 The battery you buy will come with a connector. Clip that off and strip the ends of the red and black wires. Be careful not to let the battery wires short against each other. Thermal runaway in Li-ion batteries = bad. 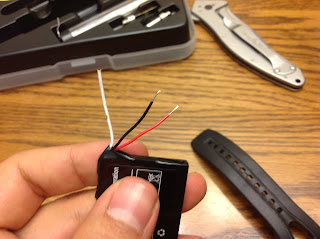 Now you just need to solder the wires together. I wanted to use some shrink tubing (I used 3/16", I think 1/8" would work better) to seal the wires back up so I slipped those on before connecting the wires. I believe the easiest way and the "right" way would be to tin the end of the wires first then fuse them together. Otherwise, you pretty much need three hands to manipulate the iron, the spool of solder, and the wires. Fortunately I had one of these little jigs, so I could do everything in one shot.

That being said, I think working in steps, tinning then fusing would be an easier way to go. (Disclaimer: I know almost nothing about soldering) Once the wires are connected, close it all up with some electrical tape, liquid electrical tape, or shrink your tubing. 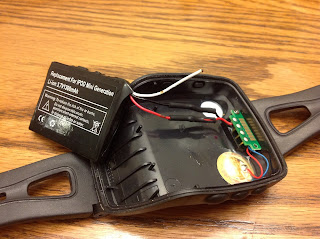 At this point I would recommend dry fitting everything back into the case putting the two halves together and testing to if it powers on. If it does, give yourself a high five! If it doesn't power on, look for any bad connections, both between the battery and the unit, and the two halves of the unit. Power it down and take the two halves apart again.

Now you need to decide how you are going to mount your battery back in the watch case. One thing you want to be mindful of at this point is that the side buttons are attached to the face, but the external buttons you push are on the back half. This means you need to make sure nothing will get in the way of this hot button-on-button action once the the two halves are sealed together. Select your mounting orientation accordingly. 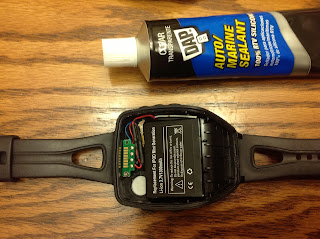 Another thing you'll need to deal with is this little plastic nub. With the original battery, it helped hold it in place side-to-side. However, our replacement battery is wider than the original so now it's just in the way. Break the little bugger off then trim it flush with a knife, x-acto, or razor blade. 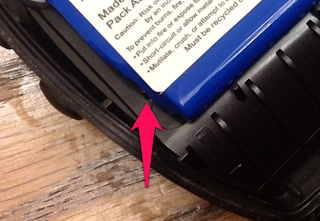 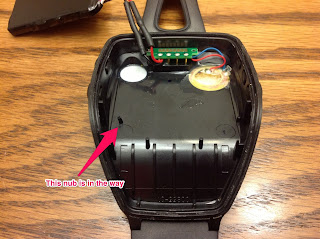 Once you've got your battery position figured out, affix it in place. Dealer's choice on method. I used a blob of the same Silicone adhesive I would use to seal the unit. You could use a good strong double sided tape if you want, or crazy glue. Whatever you want. One thing to consider is, if you ever need to do this again, how much of a pain in the ass it will be to remove it. For me that ruled out the crazy glue. Also, I wanted to make sure it stayed in place and could withstand a pretty wide range of temperatures. That ruled out the tape. Plus, I didn't have any tape.

At this point I did one more dry fit of the two halves to make sure everything powered up and all the buttons worked. You're an adult, you can do what you will. Just don't come crying to me if it doesn't work later though.

Now, all that's left is to close it all up. I used an auto/marine RTV silicone sealant. You could use crazy glue or epoxy, but you're never getting that thing open again if you do, so keep that in mind.

Lay down a thin bead of your adhesive around the rim of the back half, then stick it together. Do one more power and button check before the glue sets (another reason not to use crazy glue) in case you need to make any final adjustments. Clean up any extra adhesive that squeezes out.

In order to hold everything together while the adhesive cured, I wrapped the body in some plastic, then tightly wrapped everything in some cheap electrical tape, stretching at the turns to apply pressure to keep everything together. I left it like this for about an hour before removing the tape - enough time for things to start sticking together, not enough time to mess up the buttons by depressing them too long. 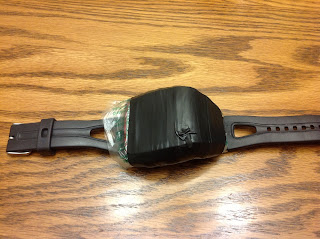 You're all done! Let your Garmin sit for the prescribed amount of time to allow the adhesive to cure, usually 24 hours. You can be topping off the battery while you do this. Multitasking!

Since the battery swap, the battery life appears more like it was when new - short logs, like the length of a 10k don't budge the battery meter. I haven't done a full run down test yet to see what the full battery life of the new pack is, but I'll make certain to report back when I do. I'm super jazzed to have my Garmin back from the grave!

Posted by Corey Singletary at 8:35 PM