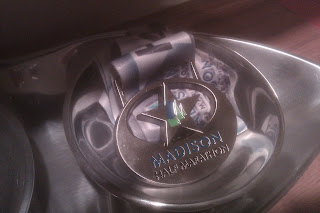 This recap is way late. But, better late than never I suppose.
---
At the end of May I completed my first half-marathon at the 2011 Madison Marathon. I had two goals for myself: 1) finish, and if possible 2) finish under 2:30. Despite some unorthodox training (read: minimal) and first time half marathon mistakes, I managed to accomplish both goals and chalk up my first official half-marathon time of 2:24:30.

Over the winter I toyed with the idea of running the Madison Marathon. Most marathon training programs are 16-18 weeks so I figured I had enough time to build up my mileage before the end of May. Well, as Sun Tzu said, no battle plan survives first contact with the enemy. My January and February mileage sucked. Like, 10 miles in January and 5 miles in February sucked . In March I realized that there was no way I was going to be able to scale up to the distance I would need in order to complete a marathon in May without hurting myself. I still wanted to keep the Glacial Trail 50k as my big goal for year so I needed to make sure I still did a long race in the spring. I figured I'd split the difference and do a half-marathon. I justified it to myself after the fact that the half was the natural thing to do because the longest race I'd ever done was a 10k so the half was the next logical step. *cough*Bullshit*cough*

Despite forking over the not-inconsiderable registration fee, I still found it a little hard to make time to get out and run. It's not that I didn't WANT to go running. I just found it really easy to make excuses as for why I couldn't. I'm kind of lazy like that, and if anything's a struggle with me and running it's getting out the door. Once I'm out there, I'm golden. But getting up and putting on the shoes... let me tell you. Herculean effort. Through March and into May I managed a measly 2-3 runs a week, mostly in the 3-5 mile range with the occasional 6 miler. I managed to squeeze in one 9.5 miler a week and a half before the race, but otherwise that was it. It was betting everything on proper form, will power, and being well rested.

So having never raced a half-marathon before (heck, having never run that far ever) I was flying a little blind as to how to best prepare for the race. Here are a list of good calls, rookie mistakes, and just plain boneheaded moves:

Good call:
Rookie Mistakes:
Boneheaded Moves:
Next to the Crazylegs Classic and the Madison Ironman, the Madison Marathon is probably one of the largest non-UW Athletics events in Madison - although the Crazylegs could be considered related since it's a fundraiser for the athletic dept. The Madison Fesitvals people do a great job putting it on but there are a couple things that could be improved:
As you may have surmised, I was denied a last minute opportunity to tend to personal business before the start. I figured everything would be fine though. Heck, I'd be at the finish in two and a half hours. I could wait two and a half hours right?

After listening to my friend the Mayor give the same announcements to both the marathon and half marathon starters (seriously, I'm sending him some material for the next race), the starter lined up the front of the pack and cut us all loose. With no visual staging of runners by pace, I locked onto the 2:30 pace team's sign in the crowd and followed that out of the starting corral. I figured I would hang back with them for the first half of the race and assess whether I had it in me to pick up the pace in the latter half. I got separated from the pace team some time in the first mile due to some course management issues but managed to reel them back in by mile 2. I tried to stay with them for a few miles but, to my surprise and delight, I found that the pace was actually too slow for me to run comfortably. So, I decided to forge on ahead and take my chances managing my own pace.

I made it to about mile 4 when I realized that nature was calling and that I was going to have to stop at some point during the race. I skipped the mile 4 aid station and figured I'd hit the next one. When I got to the mile 5 station the lines were still longer than I cared to wait. I pushed on ahead to the next station, but I kept thinking about a line from a blog or a book I've read that talks about how some ultra-runners run into problems when, due to late race fatigue, they are unable to tell the difference between a bowel movement that is imminent and one that is in progress. Needless to say I stopped at the next station, paid my newbie penalty on the race clock and moved on. (I promise that's the last of the poop talk) 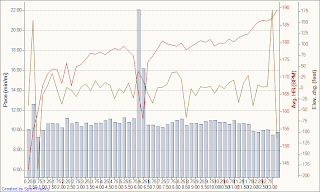 Much to my dismay, as I was waylaid in line at the aid station the 2:30 pacers caught back up with me and stretched out a good couple minute lead for good measure. As I started back on the course, I considered my strategy for the second half of the race. I was quickly going to be venturing into unknown territory but I figured I still had the legs to click back into the slightly sub 11 minute pace I had been running, and persistence hunt the 2:30 pacers. Then, once I caught up with them, if I felt I had enough gas left, I would hold that pace until the finish. Otherwise, I'd just hook into the 2:30 group and cross with them. But I'd be damned if I wasn't going to catch them.

Despite the slight hassle of having to lug the weight around, I found it nice to have my own water and gels because it made it so that I didn't have to get caught up in the traffic jam at all the water stations. It wasn't so much about the time as not wanting to slip on cups, crash into someone, or get run over negotiating the entry and exit. I don't have much of a frame of reference versus water, but the NUUN seemed to work well and it remained palatable throughout the race. The Double Espresso Cliff Shots became a little hard to suck down near the end, but otherwise I had no complaints there either as I never really experienced any real glycogen deficit.

Throughout the race I had been employing a "strides" technique I picked up from Jason Robillard's blog where, instead of slowing down for a break when your legs feel tired, you actually speed up and do 10 or 20 strides. It seems counter intuitive, but the logic is that speeding up works more fast twitch muscle fibers giving your slow twitch muscle a short break. That's close enough to real science for me, and I can't really argue with the results. Other than my little 5 minute bio-break, I never stopped or slowed down.
Between miles 6 and 9 I was passed by a guy with a sign pinned to his back that said "Still Running from Scott Walker." I have to admit that, at the time, I found it pretty darned funny. During this stretch I also ended up running along side this tall, cute girl with a massive overstride. She had the obvious look of a regular runner so I figured I would stay with her pace as it was close enough to mine but pushed me a little bit. We caught up to the 2:30 pace team around 8.5miles. I wasn't sure if I had enough to hold my pace until the end, but I figured that I was close enough that I would push it till I finished, or something blew up. I started playing games with myself like, "only 5 more miles, you've run 5 miles tons of times." and "Only 5k left. A 5k is nothing."

A little before 9.5 miles my tall coed "running buddy" dropped the hammer and left me behind. Looking back at my splits, I know she actually poured on a decent amount of speed because my pace was pretty consistent throughout but she was just plain gone. A little later, I passed a guy running barefoot who was looking pretty good for his pace and for the fact that he had put down 10 miles on asphalt and cement. At about the 10.5 mile mark, there was an Elvis waving a sign that said "3 miles till beer." Mmm... beer.

At around the 11.5 mile mark, the Marathon winner came running past. I tried not to think about the fact that he had run more than twice as far as I had in about the same amount of time. As we headed towards the 12 mile mark, it was then than I knew that I absolutely was going to finish the race. With one mile left I decided to lay it all out and push for a descending series for the last four quarters. I hadn't really been looking at my time, but I didn't want to finish and then know I could have done better if I had pushed it harder. I knew hitting that kind of pace on spent legs was going to be a challenge, particularly since the last mile includes the climb back up W. Washington Avenue to the Capital Square, only the second real elevation change in the whole race (the first was back at the beginning when you run out from the Square, down W. Washington). Still, I managed to push it through, the growing crowd, cheers, cowbells, and vuvuzelas urging me on. I crossed the finish with nothing left, and had to restrain myself from puking on the back of the guy in front of me in the finish chute. I found Andie at the sideline and she told me that I had managed to finish under my goal time. After walking for a bit, I grabbed some food and started to feel better. I made I may over to the beer tent and grabbed myself a cup of slightly chilled Michelob Ultra (mmm... light beer)

As I tossed back the brew, I basked in the fact that I had just finished my first Half-Marathon.
Posted by Corey Singletary at 9:00 AM